The results of a BBC poll, released Nov. 9 in the midst of the Berlin Wall media circus, found that only 11 percent of people globally believe free market capitalism “works well.” The poll helps get to the truth behind the pageantry and propaganda put forward by the capitalist establishment and its media mouthpieces.

While Angela Merkel and Lech Walesa tell us that toppling the Wall in 1989 represented a great victory for “freedom” and “democracy,” the reality of the last 20 years of exploitation, insecurity and economic instability weighs heavily on the workers of Germany and the former socialist bloc.

Why is this? Since the Wall’s fall, capitalism has revealed itself to be a brutal, inhuman system whereas, during its 40 years of existence, East Germany was a state oriented toward meeting people’s needs. It offered generous pensions, guaranteed employment, wage equality, free health care and education, housing for all and other essential social services. It was free and democratic in ways that capitalist countries could never be.

On this issue, revolutionaries must be clear. The fall of the Berlin Wall was a historic defeat for workers in Germany and throughout the world. It hastened the demise of socialism in Eastern Europe and the Soviet Union. For many leftists, that moment paved the way for demoralization and loss of hope in class struggle.

Understanding the origins, purpose and meaning of the Berlin Wall and its 1989 fall is important for the working-class movement today.

East Germany was born from the ashes of World War II. The country was carved out of a larger territory and forced to stand on its own. The Western imperialists authored Germany’s division.

At the July 1945 Potsdam conference, attended by Allied country leaders, the United States and Britain sought to create three zones in Germany—two for them and a Soviet zone. France later entered the picture, creating a four-power occupation.

Soviet troops occupied all of eastern Germany. The Red Army had liberated Berlin and beyond, including the most cruel Nazi death camps. The Soviets—who suffered over 27 million deaths in the war—sought a united, disarmed and neutral Germany. They wanted to remove the Nazi threat and bind it by treaty, undermining the future potential for war. The Soviet Union’s main goal was to avoid the continued division and occupation of Germany.

The remaining Allies—the imperialists—wanted no such thing. The United States came out of the war as the dominant imperialist power. It was the only allied country that had not been bombed or occupied.

In contrast to its “isolationist” policy following World War I, the U.S. ruling-class now aimed for world hegemony. This would include the indefinite occupation of its previous rivals Germany and Japan. In addition, Washington wanted to revive Germany’s economy to ensure it would become a lucrative market for exports and capital investment.

The imperialists’ position was strengthened when the U.S. government successfully tested the atomic bomb one month before Potsdam.

Much of Europe was brimming with revolutionary potential at the time. During the war, communists led the anti-Nazi resistance in France, Italy and Greece. In Yugoslavia and Albania, the pro-fascist governments were toppled by communist-led partisans who formed socialist governments. The prestige of the Soviet Union was higher than ever before.

In 1949, the United States and its imperialist allies formally divided Germany and created a separate West German state. This brought to fruition the plan to establish an occupied imperialist state that would serve first and foremost the interests of the newly emerged imperialist superpower in its sharpening confrontation with the “socialist camp” headed by the Soviet Union.

East Germany became a state only after the formation of West Germany. The Soviet and East German leaders denounced the Western ploy to divide the country—they even proposed general elections, but reunification was off the table.

Just five years later, in 1954, West Germany was integrated into the North Atlantic Treaty Organization. One of the main objectives of the NATO military alliance was to advance U.S. aims for world dominance by “opposing the spread of communism.” At the time, it was aimed directly at the Soviet Union and its allies.

At its founding, the German Democratic Republic was led by the anti-fascist elements of the working-class communists allied with the Soviet Union.

The United States also took scientists and technology from the East. This was the beginning of the “brain drain” that would deeply impact the East. At the same time, the U.S. government pumped money into the West to help it rebuild after the war, under leaders who, in many cases, had been Nazis just a few years before.

In the East, over 90 percent of the country’s productive materials were owned collectively, as opposed to a tiny few private capitalists owning the wealth in the West.

The economic surplus created by East German workers was directed toward meeting the population’s social needs. There were no landlords or rich bankers. East Germans received subsidies for food, clothes, rent, public transportation, and recreational and cultural activities. There were no evictions and no homelessness. Education was free through college. Health care was free, and childcare was affordable to all. A job was considered a human right. Sexism was outlawed, and women and men received equal wages, something that still does not exist in present-day Germany or the United States.

The GDR also supported liberation struggles in Asia, Africa and Latin America. Socialist doctors were sent to Vietnam and Africa, and students from underdeveloped countries received free training and education in East Germany. The East was an ardent supporter of the Palestinian struggle, while West Germany funneled billions to aid Israel’s Zionist colonial project.

The achievements of the GDR were great, but due to the relatively underdeveloped economy and lack of industrial capacity coming out of the war, wages were lower, work hours longer and consumer good scarcer than in the West. As a result of its “economic miracle” of rapid growth made possible by huge amounts of U.S. aid provided through the Marshall Plan and other programs, the West offered an alluring package for skilled workers and professionals living in the East.

The geographic placement of Berlin posed additional problems. Set 110 miles inside East German territory, it had been jointly administered by the Allies since the war’s end. This meant that the imperialists had military personnel stationed inside a socialist state. West Berlin became an imperialist base of destabilization and spying against the East.

East Germany withstood innumerable provocations, while enjoying steady economic growth. At the height of the Cold War, the East took steps to defend against the intensifying harassment and a growing exodus of East German citizens whose essential skills and training had been made possible by the sacrifices of the East German working class.

On Aug. 13, 1961, East Germany erected the Berlin Wall to keep the imperialists out, stem the rising “brain drain,” and contain the underground market of West Berlin goods and currency, which greatly undermined economic planning as a whole. The Wall was purely defensive in nature. It was never an ideal for East Germany. It aimed to protect the socialist project in East Germany from imperialism.

Barriers between the East and West were nothing new. Since the 1949 division, walls, fences and minefields were placed along the border. The West employed an economic blockade on East Germany that was more damaging than any physical structure could be.

Over the years, the imperialists used the Wall as a propaganda tool in attempts to prove the “repressive” character of socialism. This, along with the general stream of anti-communist propaganda coming from capitalist media outlets, confused people both inside and outside of East Germany about the Wall’s nature and purpose.

Opportunist leadership within the socialist bloc, led by Mikhail Gorbachev and his Perestroika reforms, exacerbated the confusion. The imposition of capitalist market practices and anti-socialist reforms in Eastern European countries empowered pro-capitalist forces throughout the region. There were attempts over the years to deepen these reforms at the expense of building a centralized socialist system.

Poland and Hungary were casualties of this trend in 1988; the Soviet Union would soon follow. Wage inequality and other problems apparent under capitalism emerged, which—along with the relative poverty of people in the East versus the West—disoriented some workers, resulting in lost confidence in the ruling parties and system.

Writer Victor Grossman, who lived in East Berlin, recently wrote: “[M]ost participants in the demonstrations and rebellions in the fateful autumn of 1989 wanted an improved GDR, not a dead one.” (MRZine, Nov. 10)

But a “dead” East Germany was exactly what the imperialists had in mind, as they cheered the protests at the Berlin Wall 20 years ago. Although many in East Germany certainly desired an “improved GDR,” the opposition movement was led by counterrevolutionary forces, nourished by world imperialism, and aimed at capitalist restoration.

The U.S. imperialists, along with their West German and NATO allies, had conspired for four decades to overthrow and dismantle the East. Their dream had come true.

When the Wall came down, the imperialists swarmed into East Germany. The East was annexed by the West in 1990. There was finally reunification, but not on a working-class basis.

The unhindered movement of private capital took on momentum after the collapse of East Germany, ushering in a new era of exploitation. The once growing economy of the East, in which everyone was guaranteed a job, schooling, housing and health care, became a de-industrialized wasteland. The real unemployment rate rose to nearly 50 percent in some parts of the former East. (The Guardian, Nov. 15, 2006)

“It took just a few weeks to realize what the free market economy was all about,” said one East German. “It’s rampant materialism and exploitation. Human beings get lost.” (Reuters, Oct. 16, 2008)

The demise of the Berlin Wall should not be championed as a liberating moment in working-class history. Nor should it be equated with the apartheid wall in Palestine or racist prison walls. Whereas these latter walls represent the domination of the imperialists over oppressed peoples and the working class, the Berlin Wall was a defensive barrier employed by a workers’ state to stop imperialism. Not all walls are the same.

Its fall does not represent the failure or end of socialism. This becomes more apparent each year. Capitalist restoration has brought back the contradictions that sow the seeds of new struggles ahead. 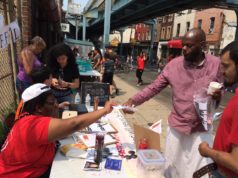 Dual power, base building, and serving the people in the U.S. Revolutionary Movement