Rebellion and the need for organization

The history of all hitherto existing society is the history of class struggles.” In one sentence, Karl Marx and Frederick Engels captured the essential driving force of class society.

Engels later amended the original formulation to account for the discovery of pre-class societies based on communal rather than private property, where class struggle was absent. The fundamental truth about class society, however, remains true.

In the recollection of human conflict, historical accounts often focus on the roles played by leaders. While leadership is certainly essential in determining the direction that the struggle takes, no leader, no matter how charismatic or eloquent, can stir the masses into struggle when they find themselves in relative comfort and peace.

It is the contradictions of class society that inevitably propel the masses into action. In all class societies, the wealth and privilege of the owning class rests on the exploitation of the toiling masses. This lays the basis for ever-present conflict, which from time to time erupts from a simmer to a boil as the burden on the shoulders of the oppressed becomes intolerable.

The struggle against slavery in the United States is often summed up in the events of the Civil War, with white abolitionists taking center stage. However, the history of U.S. slavery is rich in examples of resistance where the enslaved Africans themselves were the protagonists.

Black slaves in the pre-Civil War South frequently poisoned their masters and their families, leading to a whole system of special laws prohibiting this form of resistance. In 1751, South Carolina decreed the death penalty for any Black found guilty of poisoning a white. The preamble of a similar law passed in 1770 in Georgia explained its motivation: “Whereas, the detestable crime of poisoning hath frequently been committed by slaves …”

Arson was even more common, to the point it affected the policy of insurance companies. An American Fire Insurance Company of Philadelphia official, in response to a request in 1820, explained that the company “declined making insurance in any of the slave states.” Savannah was frequently hit by arson, usually blamed on slaves. Residents of Charleston, South Carolina, organized a committee in the 1790s to ensure the use of brick or stone rather than wood in housing construction.1

The frequency and prevalence of such incidents show that the will to struggle was widespread among the slaves. Yet these acts amounted to disconnected resistance on the part of individuals or, at most, very small groups acting in an atomized manner. It was when their shared will to struggle manifested itself as collective resistance that their power as a class was felt.

During research for his seminal “American Negro Slave Revolts,” Herbert Aptheker found records of approximately 250 revolts and conspiracies between 1526 and the end of slavery after the Civil War. Aptheker only counted those whose apparent aim was freedom, involved no less than 10 slaves, and which had been labeled in contemporary references as uprisings, plots, insurrections or any equivalent term. By his own account, the number would be much larger had he used a less strict standard.2

The first slave rebellion within the borders of the United States happened in the very first settlement where there were Black slaves. Spanish colonizer Lucas Vásquez de Ayllón founded the settlement in what is now South Carolina in the summer of 1526. Shortly after its establishment, the community of about 500 Spaniards and 100 Black slaves was plagued by death and disease, leading to growing unrest. The neighboring Native Americans grew increasingly suspicious of the settlers.

Several of the slaves finally rebelled around November, joining the Native Americans. When the remnants of the ill-fated Spanish expedition left for Haiti, the former slaves stayed behind as the first permanent, non-indigenous inhabitants of the future United States, together with their newfound Native American friends.3

Nat Turner’s rebellion in Virginia’s Southampton County ranks among the best-known slave uprisings in the United States. When it occurred in 1831, Southampton found itself in economic decline. There was growth of anti-slavery feelings and unrest among the slave population, likely aggravated by precautionary repressive measures devised by the owning class.4

Turner, who conducted religious services, had learned how to read and had studied the Bible. His rationale for rebellion featured strong religious language. Turner told other slaves of “visions” and other divine signs signaling them to rise up.

The biblical overtones were only the exterior form of what was essentially a class struggle. Later on, Turner would recount his exchange with a newcomer during a conspiratorial gathering just hours before the revolt. The newcomer declared he had come because “his life was worth no more than others, and his liberty as dear to him,” adding that he would win his freedom or die.

In the evening of Aug. 21, 1831, Turner and another five slaves set out to win their freedom. Turner’s master, Joseph Travis, together with his family, were the first to lose their lives to the rebellion. Now with arms and horses, the slaves marched forth, recruiting others along the way. Within the first 24 hours, Turner’s group of six slaves swelled to 70.

By the morning of Aug. 23, they had already taken the lives of at least 57 white slave owners and their supporters. On that day, Turner and his followers suffered a severe defeat at the hands of a white militia with superior arms. Three companies of artillery aided by hundreds of other soldiers and militia dealt the final blow the following day, quelling the rebellion through indiscriminate murder.

Although there are indications Turner was a persuasive man, it would be a serious mistake to credit the appeal of the uprising merely to his oratory skills. Aptheker verified the inspirational character of this uprising, writing that it “caused an eruption through the breadth of the slave South—which always rested on a volcano of outraged humanity.” The wave of uprisings, inspired by the Nat Turner rebellion, reflected that the oppression of slavery had reached a breaking point—making slave society ripe for rebellion.

The modern-day United States is in no way an exception to the laws of historical development. Home to the most powerful imperialists in the world, U.S. society is wracked by extreme class contradictions.

Long after the abolition of chattel slavery, racism remains an effective tool of capitalist exploitation. It pits workers against workers on the basis of nationality, allowing the ruling class to “divide and conquer” and super-exploit working people of color.

The racism that pervades U.S. society has more than once triggered massive social convulsions. Hundreds of uprisings took place in African American communities in cities around the country throughout the 1960s.

More recently, the Los Angeles uprising of 1992 illustrates how fundamental contradictions in U.S. society give way to spontaneous uprisings and rebellions.

On March 23, 1991, the Los Angeles Police Department beat Rodney King 56 times with batons, kicked him several times and hogtied him after pursuing him for a traffic violation. King went to the hospital in an ambulance with several cuts and fractures. The beating followed a 15-minute car chase that took place after King failed to pull over, fearful of the police because he was on parole.5 That might have been the end of it had the whole incident not been caught on video.

King was never charged in connection with the traffic stop. On April 29, 1992, following seven weeks of testimony, a jury of 10 whites, one Latino and one Asian acquitted three of the officers of assault. The racism of the decision could hardly have been more overt.

Within hours, rebellions broke out across Los Angeles. Scores of fires were set and stores were broken into as the community let out its pent-up outrage. The uprising peaked in the next couple of days, lasting about a week. The government responded by declaring martial law and unleashing a wave of repression. No one in the U.S. ruling class had expected such an uprising from the Black community.

People of color experience oppression daily in a multitude of ways: restricted access to education, job discrimination, negative portrayals in the media, hate crimes and the same type of police brutality unleashed upon King—just to name a few. One could easily find a number of overtly racist trials in the U.S. justice system that sparked nothing similar to the reaction to the acquittal of King’s attackers. Why, then, did King’s case cause such a massive reaction from the oppressed Black community when racism is so pervasive?

The question itself contains the answer.

The L.A. uprising was not simply a reaction to the verdict itself, but rather to the total sum of the racism experienced on a daily basis by the Black community, whose collective consciousness is shaped by their shared experience. The King verdict—itself the result of the oppression of the Black community as a whole—was the spark that set off an explosive situation.

The New York Times reported an exchange that captured the sentiment just outside of the courtroom following the verdict. An African American man shouted, “What race are you?” In response, a white man replied, “I’m an American.” “We’re not judged as Americans,” retorted the Black man.

With these words, he summed up the feeling of the Black community to a verdict that reflected their collective experience as an oppressed nationality.

The inevitability of struggle

Class society heaps injustice upon injustice, until all of a sudden “one more” such offense turns into chants of “No more!” on the lips of the oppressed. It is the inevitable transformation of quantity into quality.

When these upsurges in the struggle will come, no one knows. What we do know, however, is that they will come. We can say so with the scientific certainty of Marxist analysis backed by countless historical examples.

Rebellion is the natural result of exploitation and oppression. That has been proved over and over again throughout history.

The greatest challenge posed by every instance of rebellion is the need for organization. Nat Turner’s conspiracy was too narrow to provide a general framework for rebellion that would go beyond the neighboring plantations. The anti-racist uprising that followed the Rodney King verdicts did not have a leadership that could channel the hatred of the African American community—not just in Los Angeles, but throughout the country—into an effective political force capable of challenging the capitalist state and its racist “justice” system.

The great challenge facing the oppressed and exploited classes in society has never been the willingness to fight back. It has been the ability to organize in a form that can not only fight, but win.

That task—turning rebellion into revolution—has been one of the main contributions of revolutionary communism and underlines the need for a communist party. 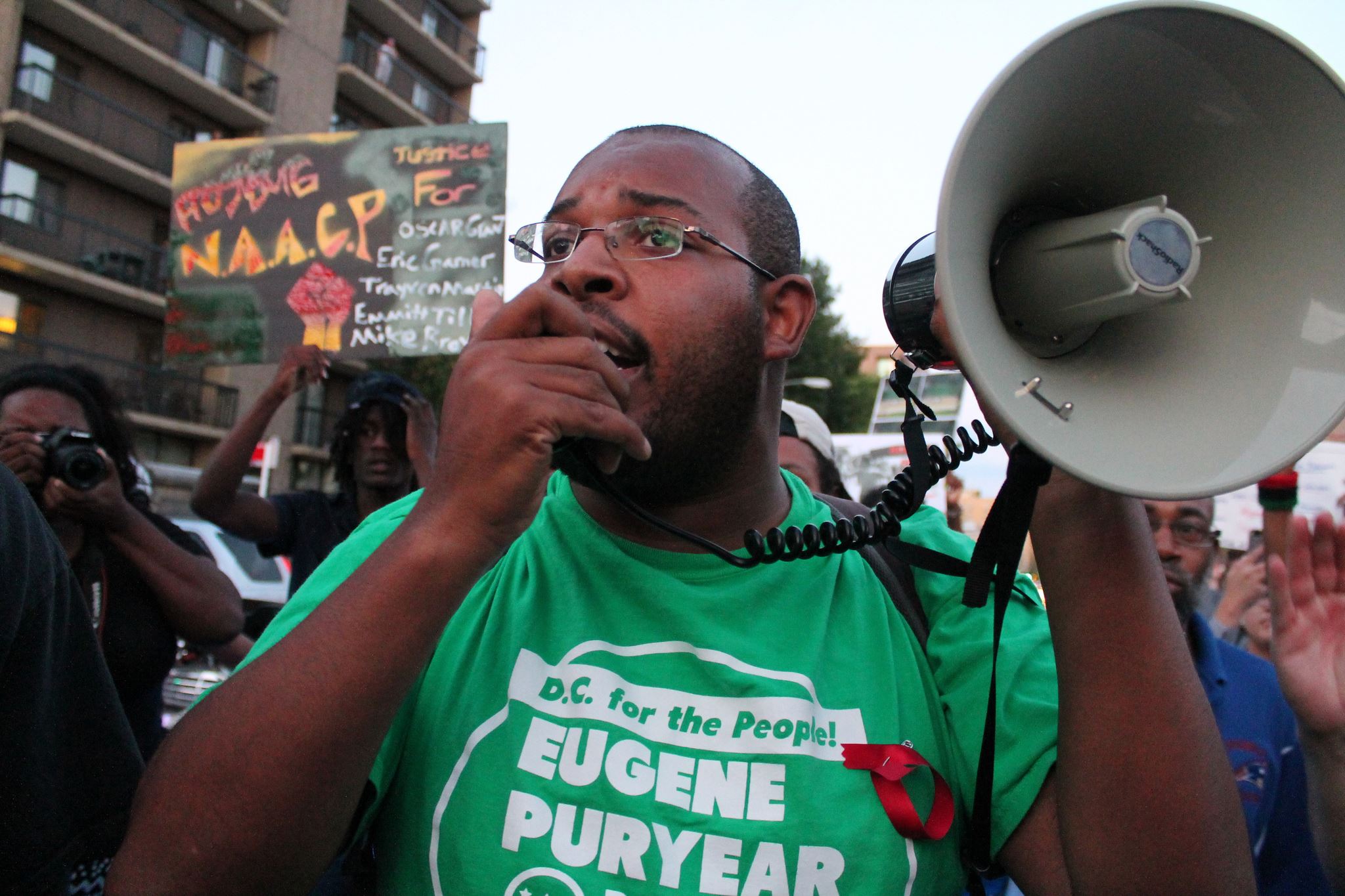