The killing of Mark Carson, a 32-year-old gay man from Harlem, in the early morning hours of May 18, in the heart of Greenwich Village marks a tragic boiling point in a recent string of anti-LGBTQ bashings in Manhattan that has left the LGBTQ community reeling with anger and fear but also a readiness to fight back.

Carson, who was African American, grew up in a working-class section of the Bronx and worked as an assistant manager at a gelato stand in Grand Central Terminal. On their way to a restaurant, Carson and a boyfriend were confronted by a group of bigots hurling slurs at them. One of the assailants then pulled out a gun and shot Carson in the face, killing him immediately.

Carson’s killing occurred in an area known for decades as an LGBTQ center, just blocks from the site of the Stonewall Rebellion that sparked the modern LGBTQ liberation movement. It was hardly an isolated incident. In the weeks before Carson’s murder there were five other anti-gay attacks reported in New York City, and there have been several since, including an assault on LGBTQ rights activist Eugene Lovendusky, 28. The number of reported anti-LGBTQ hate crimes in New York City so far in 2013 is double the number as during the same period last year.

Carson’s death and the heavy increase in bashings in recent weeks have forced into the light what LGBTQ people already knew: that discrimination, harassment and violence remain part of daily life in this country, despite the considerable progress in popular consciousness and legal reforms.

Murder among rise in anti-LGBTQ violence

The NYPD has announced a stepped-up police presence in the neighborhood that promises to last through June’s Pride celebrations. Given the NYPD’s continued harassment and violence against LGBTQ people, especially young people of color, this is no “solution.” In fact, it is likely to exacerbate, not lessen, the problems faced by LGBTQ residents in New York City.

Nor can we forget that Pride celebrations are meant to invoke the legacy of the 1969 Stonewall Rebellion, where LGBTQ people in the Village revolted against police harassment and occupation of their neighborhood.

The media have been unwilling to point the finger at the politicians and public figures who preach bigotry against LGBTQ people on a daily basis, scapegoating them for social problems and casting them as a threat to the “natural” order. Ruling-class institutions—the church, the schools, the media—have in fact demonized LGBTQ people for centuries, generating a hatred that has held sway over considerable segments of the working class. These heinous acts of violence cannot be explained, as the corporate newspapers try, only in terms of the individual attacker’s ignorance or insanity. No amount of reactionary police presence will alleviate these underlying causes of anti-gay bashings.

The LGBTQ community and its allies have responded to the murder with large protests, community safety meetings and renewed calls for community patrols.

On May 20, thousands marched from the LGBTQ Community Center to the site of the shooting in a powerful display of resolve and solidarity. Protesters mingled with other members of the community, meeting friends on the street in a somber but determined event. People chanted “Hey Hey Ho Ho—Homophobia has got to go!” and “What was his name? Mark Carson!” and held signs that read “If a bullet should enter my brain, let that bullet destroy every closet door,” quoting slain San Francisco City Supervisor Harvey Milk.

The protests have also brought class divisions to the surface. One group held a banner reading “We need a hospital—We don’t need condos,” calling attention to the fact that the local hospital where Carson would have been taken, St. Vincent’s, recently closed to make room for luxury condominiums. Christine Quinn, the current City Council Speaker who is seeking to become the first openly gay or lesbian mayor of New York City, engineered the closing of St. Vincent’s hospital, has supported Stopand-Frisk policies and generally functioned as a spokesperson for the city’s elite. So while Speaker Quinn immediately jumped into the vigils honoring Carson, some LGBTQ activists called for vigils without her participation.

Progress, to backlash, to self-defense

In every historical movement, progress has been met with a backlash. The Civil Rights movement of the 1950s and 1960s shook up the whole country, reforming the legal and political system, and impacting the consciousness of millions. But these victories also ignited a spike in racist violence and the resurgence of the Ku Klux Klan, elements that had no interest in peaceful debate or adjusting to the new laws. Many Black communities in the Deep South and the North in turned adopted self-defense techniques.

It was not the police or the government that stopped the revival of the KKK in the 1980s. Instead, mass militant protests by Black, Latino, Native American and white progressives met them everywhere they went, literally beating them to a pulp from Austin, Texas, to Washington, D.C. In Decatur, Ala., in 1983, the Klan opened fire on civil rights demonstrators as they were marching. But to their shock and amazement, young African American men—a number of whom had fought in Vietnam—returned the fire. A week later, tens of thousands of people descended on Decatur to show their solidarity. Such mass showings of solidarity and militancy ended the Klan’s reemergence.

There are likewise important precedents to show how the LGBTQ movement can cross from protest to resistance, organizing community patrols and self-defense teams to put the bigots in their place and do what the police cannot be trusted to do. In the early 1990s, militant Queer Nation activists and the Pink Panther Movement, which drew inspiration from the Black Panthers, organized such patrols in the Village.

The courageous response to Carson’s murder from the LGBTQ community—in the rebellious spirit of Stonewall—shows the potential for something similar to emerge again. We need a movement that stays in the streets, calls out the system, is independent of the politicians, demanding equality and a fundamental shift in values.

Just as militants of the Black freedom movement vowed to take action and stop racist violence, the LGBTQ community and its supporters can do the same. Mark Carson, Presente! 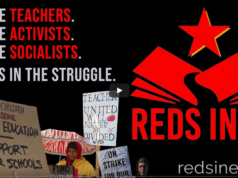 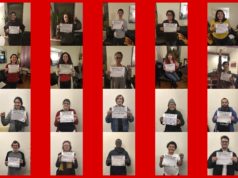 From allies to comrades