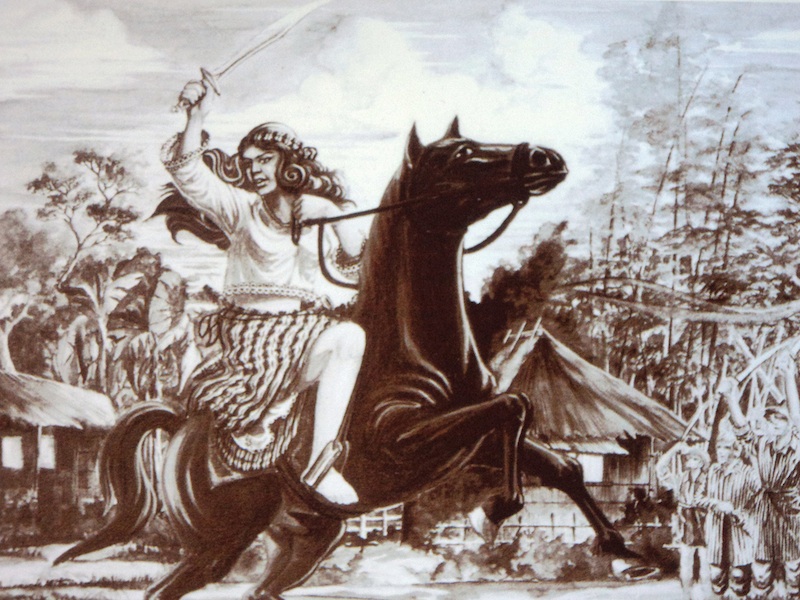 María Josefa Gabriela Cariño Silang, born March 19, 1731, and known as Gabriela Silang, is remembered as a fearless warrior and a great leader of the people of the Philippines. She was a military general in the resistance to Spanish colonialism and led the longest sustained revolt against the colonizers.

Her brave legacy has persevered long past her death. The memory of Gabriela’s actions has continued to guide women and men in the struggle against imperialism.

Gabriela was the daughter of an Ilokano peasant living under Spanish colonial rule in the Philippines. For hundreds of years, Spain dominated the Philippines through forced labor, excessive tax collection and payment of tributes.

Imperial Spain’s three centuries of colonialism were not accepted passively by the Filipino people. At least 300 significant armed revolts against cruel Spanish repression were launched by the indigenous peoples of the Philippines.

Gabriela first married a wealthy man when she was 20 years old. After three years, she left the marriage and later remarried a 27-year-old indigenous Ilocano resistance leader named Diego Silang. Gabriela was not only Silang’s partner; she was his equal and closest advisor.

During the Seven Years’ War—a war between Spain, Britain, France and other colonial powers of the day—Diego Silang was imprisoned by the Spanish. Spain was allied with France and others against Britain during the war. Britain was attempting to diminish the Spanish empire. It invaded the Philippines.

Diego Silang was imprisoned after he suggested to the Spanish authorities that they abolish the tribute, colonialist tax, and replace Spanish functionaries with native people. He volunteered to head Ilocano forces against the British. The newly appointed Catholic Bishop of Nueva Segovia rejected his call.

Diego Silang’s imprisonment stirred an Ilocano revolt. After his release, he roused his people to action once again. His effort was cut short when he was assassinated by a traitor paid by the Catholic church.

Following his death, Gabriela took on full leadership of the resistance. She moved into the Abra mountains to establish a new base, reassemble her troops and recruit from the local Tingguian community to fight the Spanish. Gabriela led the resistance group for over four months before being captured. She and around 100 resistance fighters were executed by the colonizers on Sept. 20, 1763.

The people of the Philippines eventually defeated Spanish colonialism in 1898, only to begin a new anti-colonial struggle against the United States. Despite harsh, racist repression and vicious massacres, the U.S. imperialists faced the same problems as the Spanish had. They too were unable to subdue the Filipino people.

The courageous fighting spirit and leadership of people like Gabriela still marks the anti-colonial, anti-imperialist struggle being waged in the Philippines.

The ongoing class struggle in the Philippines bears not only Gabriela’s mark, but also her name. Her deeds inspired the creation of the country’s leading grassroots women’s alliance, named GABRIELA in her memory. GABRIELA, formed in 1984, is the General Assembly Binding Women for Reforms, Integrity, Equality, Leadership and Action. Its sister organization in the United States is the GABRIELA Network USA.

GABRIELA is a powerful force in the fight against U.S imperialism and for democratic rights in the Philippines.

Its principles are stated clearly on GABRIELA’s website:”We believe that the freedom women seek will be brought about by the resolution of the problems of foreign domination, landlessness and political repression, and in the changing of patriarchal value systems and structures in Philippine society.”