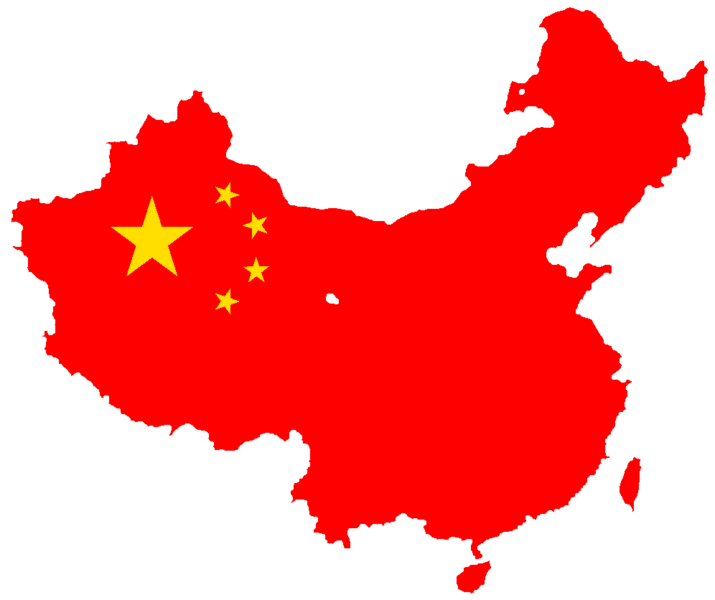 1839-42:  First Opium War. British imported tea from China, and in return exported opium from India into China. In 1839, the Chinese government destroys 20,000 chests of British opium and prohibits its use. Britain retaliates militarily.

1851-64: Taiping Rebellion is led by Hong Xiuquan, a village teacher. Millions of peasants join the fight against the Qing government. British and French forces, preferring to deal with the weakened Qing administration, support it against the rebels. An estimated 30 million people are killed in the rebellion.

1883-85:  France defeats China in the Franco-Chinese war, gaining control of nearby Indochina. Britain extends its empire from India to Burma.

1894-95:  The Sino-Japanese war ends in a Chinese defeat. China is forced to give Formosa (Taiwan) to Japan and to relinquish claims on Korea. This begins a half-century of Japanese colonial domination of Korea.

1898:  Spanish-American War. United States takes over Spanish colonies of Puerto Rico, Cuba, Guam and the Philippines. The Philippines is used as a base for U.S. penetration of China.

1899:  The U.S. government announces the “Open Door Policy,” calling for an equal opportunity for foreign powers to “develop” China for their own commercial interests. The policy is implemented because nearly all of China’s coastal region has been taken over by six other imperialist powers.

1900:  The Boxer Rebellion. Starting in northern China, people attack missionary facilities and Chinese Christians. By June 1900, militants besiege the foreign invaders in Beijing and Tianjin. The Qing government supports the militants against the foreigners, but the Chinese are crushed by British firepower. Reprisals include mass executions, forced payment of money to the foreigners and the stationing of foreign troops on Chinese soil.

1911:  The Republican Revolution, also known as the First Revolution, signals the end of the Manchu Dynasty in Central and South China. Dr. Sun Yat-sen is declared president of a provisional government in Nanking.

1912:  Sun Yat-sen resigns and Yuan Shih-k’ai becomes president of the Republic of China. Over the next few years, he suspends the provisional constitution and parliament, declares himself emperor, and is overthrown in 1916.

1923:  Members of the CPC join the Kuomintang as individuals, forming the first “united front.”

1927:  Forces loyal to Chiang Kai-shek attack the urban-based CPC in an anti-communist coup. The CPC loses 80 percent of its members in the attacks, its numbers dwindling to about 10,000. Surviving CPC members retreat to the countryside.

1929-30:  Chiang Kai-shek launches first of five “final extermination” campaigns against CPC base areas. The first four campaigns would be defeated.

1934-35:  The Long March. Chiang Kai-shek’s massive “Fifth Final Extermination” campaign forces the CPC and Red Army to embark on the Long March, which lasts for more than a year. Traveling thousands of miles on foot and fighting numerous battles, the communist-led forces suffer heavy losses but survive and establish a new base area in Yenan.

1937:  Japan launches a massive invasion of China. The CPC proposes a united front strategy to fight Japanese invaders. Chiang Kai-shek only agrees after being kidnapped and held hostage by his own generals. The war continues against Japanese invaders until 1945.

1940-41:  Cooperation between CPC and Kuomintang forces breaks down. The Kuomintang relies on U.S. aid, and the communists expand their guerrilla movement.

1941-45:  27 million Soviet workers and peasants are killed in Word War II. Two-thirds of the Soviet Union’s industry is destroyed.

1946:  The CPC renames the Red Army the People’s Liberation Army.

1949:  The People’s Liberation Army defeats the Kuomintang in the Hwai-hai campaign in January.

On Oct. 1, the People’s Republic of China is formally declared. Chiang Kai-shek flees to Taiwan. A People’s Political Consultative Conference is held, based on Mao’s text, “The People’s Democratic Dictatorship.” Workers, peasants, intellectuals and the national bourgeoisie are represented. Mao is elected chairman. He announces a foreign policy of “leaning to one side”—toward the Soviet Union. The People’s Republic of China is recognized by several countries: the Soviet Union, Norway, Finland, Sweden, Switzerland, the Netherlands and Great Britain. The United States withdraws its diplomats from China. CPC membership reaches 4.5 million.

1950:  China and the Soviet Union sign a treaty of alliance. An agrarian reform law redistributes land from the landlords to the peasants. The new marriage law gives greater rights to women. The People’s Liberation Army enters the Tibetan area of Chamdo.

War breaks out in Korea after United Nations forces, led by the United States, are sent to the peninsula. Chinese troops fight on the side of the Democratic People’s Republic of Korea (North Korea). The U.S. government sends the Navy to “protect” Taiwan.

1953:  China’s first Five-Year Plan is announced. Using the Soviet Union’s economic plans as a model, China’s plan calls for heavy industrial development. Soviet aid and advisers assist in implementation. An armistice is signed in the Korean War, but no formal peace treaty is ever signed.

1955:  Major industries are socialized. China and the Soviet Union reach an agreement on nuclear cooperation.

1956:  China backs the Soviet intervention to put down a counter-revolutionary rebellion in Hungary.

1958:  The second Five-Year Plan—known as the “Great Leap Forward”—begins. This includes the introduction of the people’s commune as the basic unit of economic life in the Chinese countryside, part of a widespread collectivization effort. The goal is to rapidly industrialize China by mobilizing the country’s vast peasant population behind the effort.

1959:  The Soviet Union repudiates a secret agreement to assist China in developing nuclear weapons. Soviet leader Nikita Khrushchev visits the United States for three days of private talks with President Dwight D. Eisenhower. Following the failure of a reactionary armed uprising in Tibet, the Dalai Lama flees to India to establish a new “government in exile.”

1960:  Ideological differences between China and the Soviet Union lead to a split. Khrushchev had denounced Joseph Stalin after Stalin’s death and called for co-existence between communist and capitalist countries. The Soviet Union recalls all technical advisers from China and cancels more than 600 contracts between the two countries.

1962:  Border disputes and incidents between India and China escalate, centered on a disputed area in which China had constructed a military road to Tibet. China attacks, taking 35,000 square miles of territory, but then unilaterally retreats, creating a demilitarized zone and calling for peaceful negotiations to resolve the dispute.

1962-65:  The Socialist Education Movement is launched to combat bourgeois tendencies within the CPC. Classes are scheduled to fit the work schedules of factories and communes. Intellectuals are drafted to do manual labor.

1963:  The Soviet Union signs a partial nuclear test ban treaty with the United States and Britain.

1964:  China condemns U.S. aggression against Vietnam, saying that an attack on Vietnam is like an attack on China itself. China successfully tests its first atomic bomb.

1965:  Counterrevolution in Indonesia overthrows the bourgeois-nationalist government of Sukarno, a key ally of China. Over 1 million Indonesian communists and their supporters are massacred.

1966:  The Great Proletarian Cultural Revolution is launched by Mao and other leaders within the CPC. In many ways, it is a struggle between left and more right-wing leaders over the course China will take, and a struggle against entrenched party bureaucrats and bourgeois tendencies. The Sino-Soviet split escalates from a mainly ideological struggle to a state-to-state conflict.

1967:  In January and February, workers in Shanghai establish the “Shanghai Commune.”

1968:  Mao announces a directive, by which educated urban youth will work in the countryside for re-education with poor peasants. There are numerous clashes, some involving casualties, between China and the Soviet Union along their border; these clashes continue the next year.

China denounces the Soviet intervention to block counterrevolution in Czechoslovakia as a manifestation of “Soviet social imperialism.”

1969:  Cultural Revolution left-wing leader and People’s Liberation Army commander Lin Biao is designated as constitutional successor to Mao Zedong. Lin had authored (in 1965) an article, “Long Live the Victory of the People’s War!” outlining a worldwide strategy of anti-imperialist struggle and had compiled the “Quotations from Chairman Mao Zedong,” which became known as “the Little Red Book.”

The People’s Republic of China takes its rightful seat at the United Nations after a majority of member nations demand it.

1972:  President Nixon visits China in February as a further step toward a U.S.-China rapprochement. During Nixon’s stay, the United States and China issue the Shanghai Communiqué. The document pledges that the countries will work to normalize their relations. The U.S. government formally recognizes the principle that Taiwan is a part of China.

In September, Mao Zedong dies. Key leftist allies of Mao, the “Gang of Four,” are arrested in October.

1977:  Deng Xiaoping is restored to his CPC positions.

1978:  Deng Xiaoping signals a reorganization of the Chinese economy, which he describes as “socialism with Chinese characteristics.” The Third Plenum of the 11th CPC Congress emphasizes the need for economic modernization with a focus on industry, agriculture, defense and science/technology.

1985:  Time magazine names Deng Xiaoping “Man of the Year” for his embrace of “free-market reforms.”

1989:  From April to June, demonstrators occupy Tiananmen Square in Beijing, opposing the government. Demands escalate from calling for “democracy” to calling for the CPC-led government to resign. Protests continue for six weeks before the government moves to end them. Several hundred people die in fights near the square on June 3-4, many of whom were soldiers of the People’s Liberation Army. Anti-China hysteria sweeps the United States. The U.S.-China alliance ends.

1991:  The Soviet Union is overthrown and dismantled.

1999:  NATO warplanes bomb the Chinese Embassy in Yugoslavia during the war.

2000:  The U.S. Senate passes the Permanent Normal Trade Relations bill, which guarantees Chinese goods the same access to the U.S. market as products from other countries.

2001:  In April, a U.S. spy plane collides with a Chinese fighter jet, killing the Chinese pilot and forcing the spy plane to land on the southern Chinese island of Hainan. China accuses the U.S. plane of ramming its aircraft.

2002:  The 16th National Congress of the CPC opens party membership to China’s capitalists—owners of private capital.

2005:  The United States and Japan issue a joint agreement in February, declaring for the first time that security in the Taiwan Strait is a “common strategic objective.” The declaration is a thinly veiled threat against China.

China Reform Forum chair Zheng Bijian states that the number one goal of the country’s leadership is for China to go from being an “underdeveloped” country to a “medium-level developed country” by the mid-21st century.

2007:  In May, Nigeria launches its first telecommunications satellite from China. It was designed and built by Chinese engineers.

Seventeen members of the CPC issue a public letter in July to the CPC’s leadership, urging a reconsideration of the general line of economic reforms.

In November, China blocks U.S. naval vessels from entering Hong Kong, saying that relations with the United States have been “disturbed and harmed” because of actions with regard to Tibet and recent massive weapons sales to Taiwan. 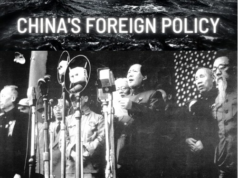 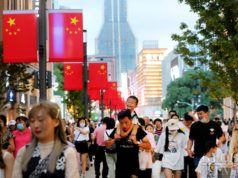