Fighting for reforms while pointing toward revolution

The Party for Socialism and Liberation is built on two essential premises. One is revolutionary Marxist theory and analysis on all issues affecting humanity and the environment we live in, especially the most pressing issues facing workers and oppressed peoples.

We strive through our literature, newspaper, social media, video, agitational leaflets, and more, to popularize and communicate to our class the truth behind the capitalists’ lies and the urgent need for socialism.

But theory and politics would mean nothing without struggle. That is the other essential premise of our organization. Action is the key to progress, the only way to defeat right-wing policies and win rights, and ultimately to achieve the liberation of humanity through socialism.

Over the past decade, the PSL has been involved in numerous diverse struggles, far too many to list here. A few highlights follow.

When we announced the formation of the Party for Socialism and Liberation, it was during the first term of the George W. Bush administration, 15 months into the U.S.-led occupation of Iraq and almost three years into the occupation of Afghanistan.

The founders of our Party had been involved in the anti-war movement for decades, going back to the genocidal U.S. war against Vietnam. We were very active in founding and leading the ANSWER Coalition — Act Now to Stop War and End Racism — a truly anti-imperialist organization with a mass following that mobilized demonstrations in Washington, San Francisco and Los Angeles of up to 500,000 people against the U.S. wars in the Middle East and South Asia.

We did not agree with those in the anti-war movement who argued that the demand against the war should be confined to “Bring the Troops Home.” In addition to ending the occupations of Iraq and Afghanistan, ANSWER called for an end to Israel’s U.S.-supported colonial occupation of Palestine.

The Palestinian people, long oppressed by U.S. and British imperialism and the Israeli colonial state, have for too long been ignored by the more liberal, moderate sectors of the movement.

By including the Palestinian cause, as well as unequivocally opposing U.S. aggression in all of its forms, we proved through the massive turnout in many of the protests that a principled, anti-imperialist and internationalist position on Palestine, Iraq and Afghanistan is by no means a drag on the movement. In fact, this is both an obligation of a revolutionary Party and helps to raise the consciousness of the people.

In the spring of 2006, when the vicious anti-immigrant offensive was unleashed through the “Sensenbrenner” bill in Congress, a huge mass movement arose quickly throughout the United States demanding full rights for undocumented workers.

The bill was a real threat to all undocumented people and their families. If the racist bill had become law, people without “legal” status would have been liable for felony charges, simply for living and working in the United States.

The Party for Socialism and Liberation threw all our forces into this struggle, joining with our sisters and brothers to demand full immigrant rights under the slogan, “Amnesty Now!” This was the main demand on the streets among undocumented workers and immigrant communities at the time.

For several inspiring weeks, the power of one of the most oppressed sectors of the U.S. working class was shown, as immigrants defied their bosses and the government to declare a general strike of the undocumented. PSL members helped organize and participated in the mass marches and rallies in cities and towns across the country.

On May Day 2006, the largest demonstrations ever in the history of the United States took place. With millions of undocumented workers in the streets and absent from the workplace, whole industries had to shut down, including giant food-production plants, restaurants and stores.

While the Sensenbrenner bill was dealt a smashing defeat due to the huge and militant fight-back of immigrant workers, millions of undocumented people continue to be denied legal status and the struggle for justice goes forward.

On August 29, 2005, New Orleans and much of the Louisiana and Mississippi Gulf Coast was devastated by Hurricane Katrina.

Making Hurricane Katrina’s direct damage far worse was the racist and criminal neglect that followed the storm, causing thousands of deaths and disappeared people, and massive suffering for the African American and other poor communities in New Orleans.

PSL and ANSWER Coalition members traveled to New Orleans to convey our solidarity politically and concretely, bringing what aid we could transport. We produced a video, “Heroes, Not Looters,” to counter the racist lie that people were committing crimes. Instead, we helped to expose the absolute criminality of the government that forced people to fend for themselves for weeks and showed that truly heroic feats were carried out by the poor.

Against the oil companies, for environmental justice

On April 20, 2010, the Deepwater Horizon drilling rig, owned by the BP oil conglomerate, exploded. It was followed by 90 days of oil gushing into the Gulf of Mexico, creating the most disastrous marine oil spill in history.

The PSL was instrumental in creating the “Seize BP” campaign to demand the seizure of BP’s assets. The campaign demanded that this seized wealth be used to immediately and fully compensate the millions of residents in Louisiana, Alabama, Texas, Florida, Mississippi and the rest of the Gulf region and called for the criminal indictment of the BP executives and others responsible.

An epidemic of police killings has terrorized working-class communities from New York to California and everywhere in between. The PSL has acted quickly to mobilize support for the victims’ families and community, playing a critical role to keep the heat on the authorities and demand justice.

Although there are many examples of PSL and ANSWER involvement in several cities, one stands out in recent weeks: Albuquerque.

In the last four years, the Albuquerque Police Department has shot 26 people to death. On March 21, a video went viral of an unarmed homeless man, James Boyd, who was shot in the back in the city’s foothills. Young PSL activists played a key role in organizing a militant mass protest of 1,500 people. Together with victims’ families and other activists, they shut down the City Council proceedings and occupied the mayor’s office, demanding action.

The PSL has been active in the struggles for freedom for U.S. political prisoners, who have suffered decades of unjust persecution and imprisonment, including Mumia Abu-Jamal, Leonard Peltier, the Cuban Five, the Angola 3 and Oscar López Rivera. We are committed to their struggles until they are free, as well as fighting the mass incarceration of millions of oppressed people in the United States.

From the formation of our Party, PSL activists have been deeply involved in the struggle for LGBTQ liberation. In November 2008, after the narrow passage in California of the reactionary and homophobic Proposition 8, PSL organizers were among those marching in the streets in the spontaneous outpourings of anger across California and the around the country, including civil disobedience actions. Currently, PSL members are leading the fight for justice for “Jane Doe,” a 16-year-old Latina transgender girl who is in prison despite no charges being filed against her.

The mass movement demanding equal rights has been the key factor in the legalization of same sex marriage in more than 20 states since 2008.

PSL members and supporters were very active in the Occupy movement that spread like wildfire across the United States, from staying nights in the camps to leading a “bank takeover.”

Women Organized to Resist and Defend — WORD — has been active for more than a year to defend a woman’s full reproductive rights and fight for an end to violence against women. We are now mobilizing in support of Marissa Alexander, who faces being railroaded into Florida prison for defending herself from domestic abuse.

The Party for Socialism and Liberation is dedicated to building a mass, militant people’s movement. If you agree, join us! 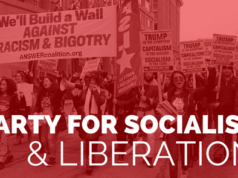 Program of the Party for Socialism and Liberation 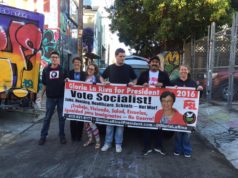 Why we’re running in the 2020 elections