The rise of public education and why we're losing it today

No Child Left Behind began the hysteria of “high stakes testing.” The result meant the private sector could access federal funds which were previously unavailable to them. Pearson publishing and McGraw Hill made record profits in the years following NCLB as a result of the sale of standardized tests, new curricula and homeschooling options aimed at passing the new state tests.

Since January of this year, U.S. senators have been debating the options in a bill to revise No Child Left Behind. Congress has been unable to compromise on what needs to change. Some senators like Republican Lamar Alexander propose more leeway on testing. Democrat Patty Murray stresses the need for annual assessments in order to keep low- performing students from “falling through the cracks.” Both the Senate and the House anticipate having bills on the floor in the coming weeks.

All of this begs the question, “why is all this happening?” Why the constant efforts to restructure and undercut public education?

Every few years, there is a new “reform” craze that promises to turn around “low-performing schools” but never a reflection on why the last one failed. Why are so many politicians on both sides of the aisle quick to come together to attack teachers and undermine public education?

What will it really take to close the achievement gap?

The organization of the public school system, and teachers’ rights in particular, has become a convenient scapegoat for the economic problems of capitalism: inequality, stagnant low wages, unemployment, declining global “competitiveness,” and so on. If politicians want better schools and schooling, they could show that by providing the resources necessary to improve them. If they want to motivate our students to learn, they would launch massive jobs programs and infrastructure projects to serve and upgrade oppressed communities. They would make a job at a living wage a basic right, along with access to free higher education. They would end the school-to-prison pipeline that criminalizes youth.

In other words, they would make massive investments to drastically transform society at large. But the politicians, generally multi-millionaires themselves, have an interest in maintaining the status quo. In this era of austerity, politicians pursue reforms that either slash budgets or are “budget-neutral.” Such broad reforms do not even come up for consideration in the revision for NCLB because those are not the outcomes that politicians truly desire..

The problem goes deeper than “to test or not to test?” Any school system is, at bottom, a means of training children to integrate into society. The question is what type of society they are being integrated into, one that treats them as full human beings with creativity and potential, or one that treats them as faceless low-wage workers. The attack on public schools has to be seen in the context of its history and purpose.

Development of public education in the U.S.

Prior to the American Revolution, education occurred in the home. Parents or tutors taught their children in private settings. In the early 1600s, the colonists began establishing basic public schools as they found homeschooling was insufficient. Only boys, who needed to learn in order to take on professions, were encouraged to attend what would now be considered elementary schools. By the 1840s, a few public schools were established in communities that could afford to fund them from parents that saw the benefit of educated heirs.

Following the industrial revolution and the move from small farm life to city life, there arose the need for a more educated work force. Where family farms and factories were once the norm, now bigger industries required workers with more advanced skills. In order to compete in a growing global economy, the United States not only needed more middle- class spending, but needed more brain power. Educators and the ruling elite designed a higher education system (beyond elementary school) that would develop higher-order thinking, increase “social responsibility,” and produce the managers and professionals needed at the time. By 1918, all American children were required to attend at least elementary school.

During this time, the character of public schools changed. Rather than the original one-room school houses that just taught students to read and write, the high schools of the early 1900s adjusted to prepare students for colleges and universities. This shift in the nature of the school system was in response to the demand for “human capital” in the expanding work force and new industries.

Given that the education system was tied directly to the labor market, Black, Latino, Native, and immigrant communities were either shut out entirely from the public education system or left to far inferior schools, with better access won only through persistent struggle.

What we have now, thanks to the expansion of college preparation schools, is a highly developed education system and a working class that is formally more educated than ever. But the economy that students are being funneled into, on account of union-busting, automation and outsourcing, offers only low wages, instability and constant insecurity.

A surplus of highly educated workers

It sounds absurd to say, but from the ruling-class perspective, there is now actually a “surplus” of qualified and educated workers. And today’s millions of U.S. students are not only competing amongst themselves but also competing with the rest of the world.

Karl Marx uncovered the inner logic of the chaotic and crisis-prone system of capitalism, focusing especially on the crisis of overproduction in commodities and showing that the system itself created wealth on one side and misery on the other, with a built-in “reserve army of the unemployed.” Today that army is highly qualified and educated, which is beneficial to the wealthy elite to hold down wages and living conditions.

So what is the implication for today? All school systems are geared to the economic system to which they are tied. We can see from the history of public education in this country, its purpose at other stages was to create an educated work force in response to a growing economy. Today, the school system is deeply stratified, just like the labor market and society as a whole. And which schools suffer? The schools where students know (and intuitively feel) that there is nothing promising for them on the other side of graduation.

Teachers struggle to give hope to their students despite the hopelessness of the economy they are living in. Teachers hope that our effort is enough so we demand more resources to be better at what we do. We see a system that is failing our students. It is a successful system in doing what it was created to do. It gives students the education, and the disciplinary training through rote testing, that they need to be low-wage workers. Those who cannot cut it are marked as “problems,” given early criminal backgrounds that will direct them to the informal economy or the prison system. That is why politicians will never debate the real issues surrounding the achievement gap on the Senate floor. No sane politician would ever say any child deserves to be without an education, even if they know an education has no purpose without the job to funnel into. So Senators are left to put the blame on others: teachers, parents, unions. These, they will say, are the failures when it comes to our children’s education.

The rich get richer in this education system

In general, the best jobs in the economy are filled by those from the top colleges. The top colleges in turn select from certain high schools, high schools from middle schools, and so on. So who are the students that are being accepted and filtering in to the top? In general, the vast majority are students whose parents can afford to supplement their regular education. Schools in wealthier neighborhoods benefit from the taxes generated in that neighborhood. Parents in these neighborhoods are also likely to further supplement schools with donations or supplement their child’s education with private extracurricular activities.

Aside from a few exceptions, the high-performing working-class students who objectively “win the lottery,” most students today, even the good testers, end up in the same social class to which they were born. The senators never discuss that reality. They never discuss what generally happens to even the “good students” in oppressed communities, who are often forced to give up on their education to enter the low-wage job market and help cover their family’s health care and living expenses. They don’t discuss what sort of impact that has on the “motivation level” of other students, and school staff.

The reality is that all working-class children are “left behind” under capitalism. Or rather, held behind.

From a human point of view, it is absurd that there could be a surplus of educated people. There is plenty of meaningful labor that is needed to improve and transform our communities and society. But in this system, labor is only rewarded as a job if a capitalist decides he can make a profit from it. 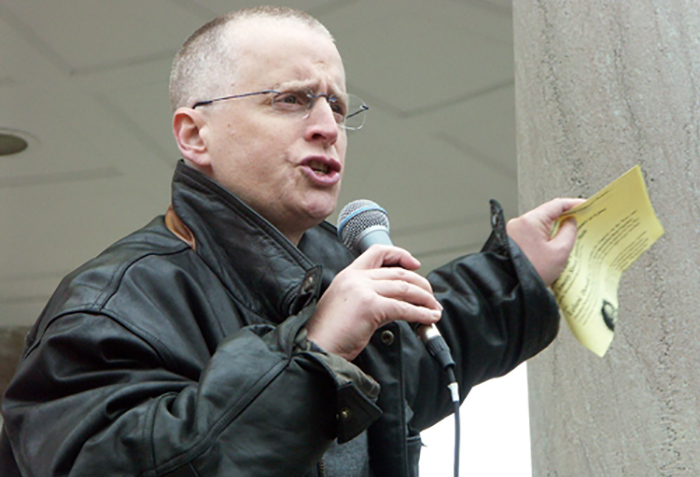