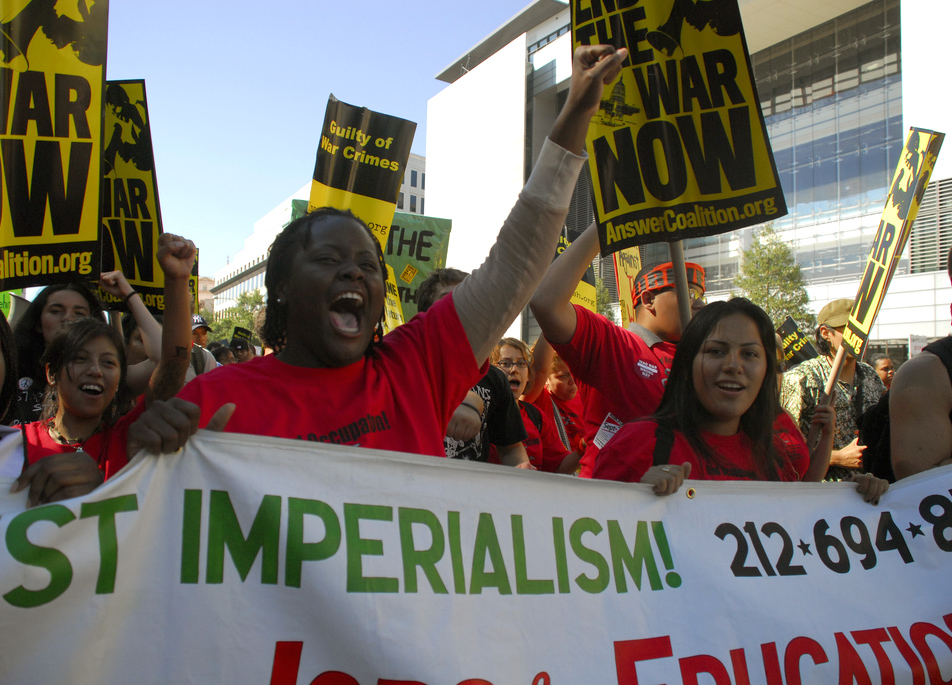 White House Press Secretary Scott McClellan admitted that the president was “very much aware” of the 300,000 anti-war protestors in Washington, D.C. on Sept. 24. That is an understatement. Although they don’t say it out loud, the entire political establishment is dreadfully aware that the anti-war movement has the potential to rapidly grow into a dominant factor in society. For now, this is still a potential.

The political establishment in the United States is exceptionally class conscious. They have evolved as a ruling class for over 400 years. What they fear now is exactly what they have always feared: that the population will rise from its political slumber. They hated what they refer to as “the 1960s”—the mass anti-war, civil rights, national liberation, women’s and LGBT movements—because millions of “average” working-class people became political radicals and thousands of young people became revolutionaries.

The capitalists had hoped that the 1950s would last forever. The combination of Jim Crow apartheid, white supremacy, hyped-up anticommunism and patriotism were supposed to maintain political lethargy on the home front while the U.S. corporate and military establishment consolidated its global drive to ensure its place as the new world power.

The goal of the ruling class is to have the people remain passive, apathetic, unaware and disinterested in politics. The political uprising of the 1960s caused the greatest fear because it was in the streets. It spread like wildfire at the grass roots. It became increasingly militant. By 1971, military recruiters and pro-war politicians could not go to any urban area, college campus or high school without the certainty that there would be a confrontation.

A break from the Democratic Party

The radicalization of the 1960s was in good part due to the fact that it was not an electoral movement. It was a movement that was compelled to battle the government at a time that the Democratic Party controlled the presidency and Congress.

Today, liberal organizations like United for Peace and Justice, Code Pink, Peace Action, NAACP, NOW and many others complain that the Democratic Party politicians don’t take a strong enough stand against Bush and the conservative Republicans. A particularly popular theme or slogan is that the “Democrats need to get a backbone” in order to fight against Bush. In liberal circles, this sentiment is so widespread that it has entered, or devolved into, that vapid category of insight known as “conventional wisdom.”

However, the movements of the 1960s became radical, threatening the social order and the political establishment, precisely because it was directed against the Democrats who held the White House until 1969.

For most of the 1960s, as the civil rights movement evolved into a Black Liberation movement and as the anti-war protests evolved into a massive, street-based radical movement, the government was led by the Democratic Party. Kennedy and Johnson were Democrats. When people chanted, “Hey, Hey, LBJ, How many kids did you kill today,” they were fighting against the Democratic Party, not looking to it for salvation.

Between 1965 and 1972, the movement became more and more radical. Young people emerged as new leaders. Millions of young people in the African American, Puerto Rican, Mexican-Chicano, Indigenous, Asian and white communities joined or participated in radical and revolutionary activities and organizations.

The mass women’s movement and the gay liberation movement emerged throughout the country in the new climate of radicalism and activism. Tens of thousands of soldiers formed anti-war organizations, published anti-war newspapers and leaflets and opened anti-war clubs and coffee houses.

By 1970, more than a million 18-year-olds broke the law by refusing to register for the draft; thousands more went into exile or “underground” rather than serve in Vietnam.
It was this growing radicalism and militancy of the mass movement that generated so much fear within the ruling class in the 1960s. The fear was real and at times reached levels of hysteria.

It also caused the political operatives of the system to become the agents of reform even as they waged a repressive campaign against the left. It was during the tenure of the right-wing Nixon administration that the government first introduced affirmative action, massively funded community service programs in the inner cities, gave 18-year-olds the right to vote, provided new tuition aid and job programs directed toward working class communities and relied on a conservative Supreme Court to legalize abortion rights for the first time.

Of course, as these “reforms” were being put into place, the government intensified its war and repression against the Black Panthers, the Young Lords Party, the American Indian Movement and other national liberation struggles, as well as the growing number of socialist and communist organizations whose ranks were swelled with young people of all nationalities.

While the power of the radical movement of the 1960s frightened the political establishment with the specter of deepening civil strife and revolution, some of the leading lights of bourgeois liberalism—yes, such a category actually existed once upon a time—urged the ruling class to keep its head. Liberal Supreme Court Justice William O. Douglas pointed out that the radicalism of the 1960s was “not ideological in its orientation, but is essentially activist.” (Douglas, “Points of Rebellion,” 1969)

While many in the ruling class wanted to resort to mass repression and the elimination of civil liberties, Justice Douglas reminded them that the “First Amendment to the Constitution [was] a great safety valve.” He summarized the situation this way: the radical movement is “led by young people who … have given these protests a revolutionary tone. The goal of their revolution is not to destroy the regime … [but] to make the existing system more human.”

Douglas was demonized by the establishment and Gerald Ford—then House minority leader—who introduced articles of impeachment to remove him from the Supreme Court. But Douglas’ view aptly characterized the greater part of the 1960s movement. A minority moved in the direction of carrying out a social revolution against capitalism, but the vast majority of all sectors remained issue-oriented. It was indeed a movement that was in the main “not ideological in its orientation, but essentially activist.”

New radicalization in the U.S.

The Sept. 24 mass anti-war demonstration in Washington, D.C., coming in the wake of growing popular outrage against the government’s racist and criminal handling of Hurricane Katrina, was a sign of a potential new radicalization inside the United States. The world is awaiting such a development.

For a newly radicalized movement to become a powerful force, it must exhibit the cutting-edge militancy of the revolutionary wing of the 1960s movement. But it must also go beyond “activism” and become an “ideological” force. It must be guided by the need to understand and explain that the problems of war, militarism, racism and social oppression will only become more acute unless society is freed from the grip of the capitalist banking and corporate elites. The system of state repression that guards the elite’s property interests and reinforces their neo-totalitarian stranglehold over the official political process of the country must be broken.